South Africa batsman Hashim Amla has retired from all forms of international cricket with immediate effect, bringing down the curtains on a stellar 15-year career that he termed an “incredible ride”.

“Firstly, all glory and thanks to the Almighty for granting me this Proteas journey which has been nothing but a joy and privilege,” Amla said in a statement. “I learnt many lessons during this incredible ride, made many friends and most importantly shared in the love of a brotherhood called Protea Fire.

“I would like to thank my parents for their prayers, love and support, it is their shadow over me that enabled me to play for years under the Protea sun.

“Also, my family, friends and agent, my team mates and every member of the support staff throughout this incredible journey. A heartfelt thank you to every one of you. The fans for energizing me when times were tough, and for celebrating with me when we succeeded together. Siyabonga South Africa! Love and peace.”

A naturally gifted stroke-maker, Amla was earmarked for a fulfilling international career even as a teenager when he led South Africa at the Under-19 World Cup of 2002. He was handed captaincy of the Nashua Dolphins – his state side – at 21 and impressed everyone with his ice-cool demeanour. A Test debut at the Eden Gardens in Kolkata during the 2004-05 tour of India was only a natural progression of his rapid rise through the ranks.

The top level posed several questions of his wristy technique and it took several re-calibrations, both mental and technical, for Amla to establish himself as a Protea regular. A career-saving 149 at Cape Town against New Zealand heralded the start of a comeback. When he travelled to India in 2010, he was dismissed just once in two Tests and ended up aggregating a staggering 490 runs in the series. He followed that up with a stellar show in England in 2012 and again in Australia, where a 196 at Perth catapulted him to the top of the Test rankings for batsmen.

For a player who was originally considered a misfit in the ODI format, Amla scored 8,113 runs at an average that dipped below 50 (49.47) only because of an extended late-career dip. This included 27 centuries – the most for a South African batsman. He was named South Africa Cricketer of the Year in 2010 and again in 2013. 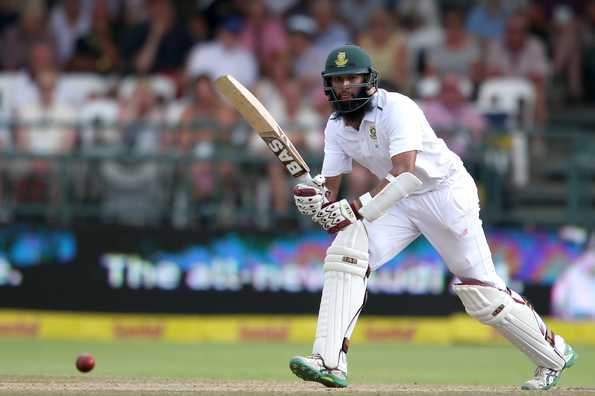 Hashim Amla had a brief stint as South Africa Test captain in 2014 post Graeme Smith’s retirement. During his 14-Test tenure as the Proteas skipper, he led a still-transitioning side to a rare series win in Sri Lanka. His batting form though dipped through his stint, eventually forcing him to relinquish the post midway through the home series against England in 2016, which he did after slamming a double hundred in Cape Town.

Amla’s average nosedived post 2016 as age caught up with a technique that relied heavily on hand-eye co-ordination. There were doubts if he would play the 2019 World Cup given his diminishing returns. He made the squad but there was to be no final hurrah, with Amla managing just 203 runs from seven innings at an average of 40.60 and a strike-rate of 65.

The finish though did nothing to dislodge Amla from among the pantheon of South African greats.

“It is always sad to bid farewell to one of the true legends of the game,” commented Cricket South Africa (CSA) Chief Executive Thabang Moroe. “But at the same time this is rather an occasion to celebrate the richness that Hashim has brought to the game around the world both on and off the field. His humility has always been his standout quality and I cannot imagine a better role model to teach us all how to lead better lives. He has added great value not only to the Proteas but to the country at large.

“I am sure cricket players, administrators, the media and fans from around the world will join the CSA Family in congratulating Hashim on a job well done and to wish him all the best for the future.”

Despite his retirement from international cricket, Amla will continue to be available for domestic cricket as well as the Mzansi Super League.

We wanted to lay down the marker – Warner

Will RCB find the solution to their death bowling issues or...

ABOUT US
Contact us: sm@sportpulse.co
FOLLOW US
© Copyright © 2019 Sportpulse All rights reserved. | Powered by Seran Gaming
MORE STORIES

Stokes uncertain to bowl in remainder of Hamilton Test